History of the development of the center

The Federal State Budgetary Institution “National Medical Research Center of Rehabilitation and Balneology” of Ministry of Health of the Russian Federation (FSBI NMRC RB of Health Ministry) the main institution in the field of balneology and rehabilitation of the country in 2021 celebrates the centenary. 100 years ago, the Institute was formed from two state scientific institutes - Balneology and Physiotherapy.

It all started with a project initiated by the Moscow Physical Therapy Community in 1911-1912. The Institute of Physical Methods of Treatment with a clinical and experimental base was a need for development of the physiotherapy and introduced new methods of treatment and recovery in the work of existing medical organizations. May 20th, 1920 the People's Commissariat of the RSFSR approved the project on creation of the Institute and got its own building at Petrovka, 25. The Head of the new important for the country's medical structure was appointed Professor Samuel Borisovich Vermel.. 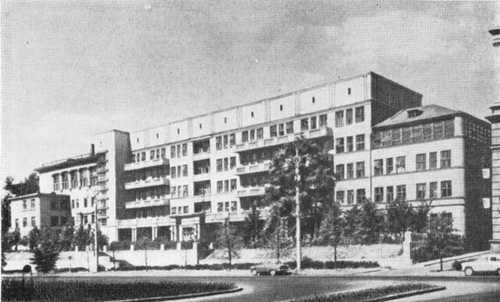 Therapeutic gymnastics, prosthetics, massage, rehabilitation of disabled people after the war and professional athletes were under the jurisdiction of the Institute of Physiotherapy. Later, the methods developed by specialists of this institution were introduced into the practice of many organizations of the RSFSR and the USSR. The theory was supplemented by the creation of new models of physiotherapy equipment — for this purpose, a small "Bureau of Precision Mechanics" worked in the country. Departments were opened on the basis of the State Institute of Physiotherapy. So, by the end of 1922, the departments of neurology, orthopedics and therapy were functioning. 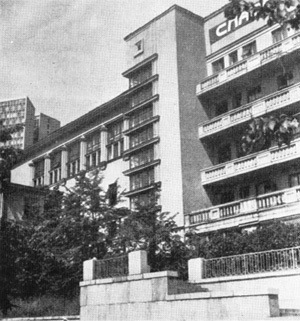 The second institution that became a platform for the current FSBI "NMRC RB" of the Ministry of Health of Russia, emerged as a response to the revolution of 1917. The civil war did not spare people, there were many wounded and injured. Many needed resort treatment, Balneological selection hospital were based in the building of the Moscow gymnasium on Sadovo-Samotochnaya street, 10 in 1918. In 1918, the hospital had 200 beds, and the organization was called the Resort Distribution Hospital in 1920.

The hospital staff showed a scientific approach in their work. Thus, they created the first list of indications and contraindications to the direction of resorts. The sanitary unit investigated the effects of balneotherapy on people with certain diseases as well as various injuries. In 1921, the hospital, run by V.A. Alexandrov, opened 3 additional wards with a capacity of 60 beds.

On July 7, 1921, the Regulations and Instructions for the Clinic at the Central Scientific Commission for the Resort Study were developed and ordered by Narkomzdrav. The functions of the institution became wider and it was there diseases had been studied in terms of the resort impact on them. Comprehensively considered the therapeutic actions of physical factors on the human body, improved methodology, and the ranks of scientists replenished new specialists.

In 1921, I.A. Bagashev first came up with the idea of establishing a scientific institute for the study of the Soviet Republics resorts at the All-Russian Congress on Resort Affairs. Several times over the next five years, the clinic was renamed and eventually became the State Central Institute of Balneology. Various units have been set up on the basis of this institution, staffing and equipment have been upgraded. The list of balneo-procedures has been significantly expanded, new treatments have appeared. The Institute published all sorts of scientific papers that allowed to recognize it as a leader. 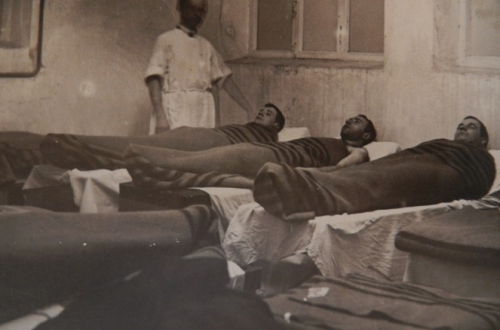 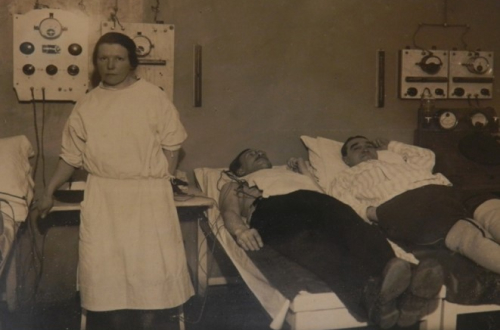 The Institute of Balneology's own building appeared only in 1934. It was built on the site of the former Novinsky monastery. The project of the future complex was given to the Architect A.V. Samoilov for development. The Institute without stopping its activities moved gradually for 4 years (1929-1933 )to a new building. The rich finish was made by special order: window frames and apertures made of valuable wood and glass. Door handles, lamps, curtains and linen - everythingl in new rooms was made of the best materials and was distinguished by sophistication. Today, the Center’s building wall plaque resembles about the 16th-century Sanctuary.

Central Institute of Balneology and Physiotherapy

Another merger took place in 1958. This time the State Central Institute of Balneology and the Institute of Physiotherapy have united. The organization was called the "State Research Institute of Balneology and Physiotherapy of the Ministry of Health of the RFSR." Two years later, the structure was handed over to the Ministry of Health of the USSR, since then it became the head among the single-disciplinary scientific institutions of the country - research institutes, branches and laboratories numbered more than 20. 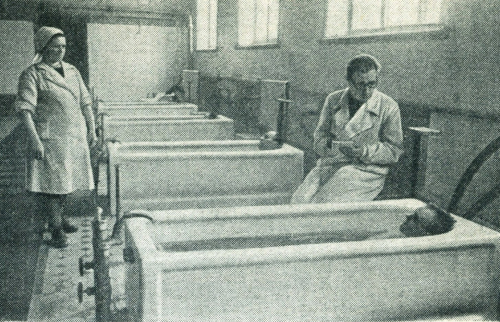 In 1966, Yu.E. Danilov appointed as a new head increased the authority of the Institute by working closely with the relevant institutions of the Soviet Union. The territory adjacent to the Institute was cleared of log barracks, and construction of a country clinic was started in the village of Yudino in the Odintsovo district of the Moscow region.

During the same period, by the efforts of Professor V.T. Olefirenko the balneary was completely rebuilt and two wells were drilled that supplied natural mineral water for external and internal use. The drinking gallery for public use, designed in the form of a greenhouse was among the luxurious European balnearies.

In 1973, the Central Research Institute of Balneology and Physiotherapy was awarded by the Labor Red banner order for services to the development of its branch of science and training. 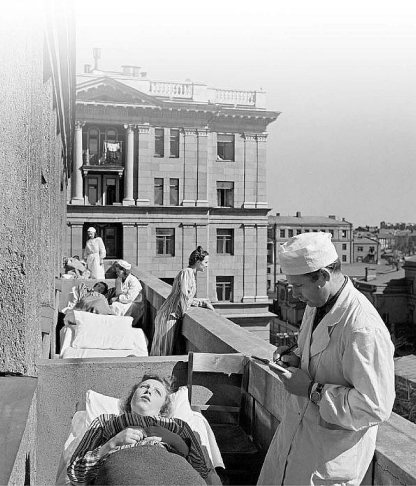 A number of reorganizations of the Institute took place in the late 1990s. The Institute of Balneology and Physiotherapy was transformed into the "Scientific Center of Restorative Medicine and Balneology" of the Russian Ministry of Health. Its head was Professor A.N. Razumov. The name of the Institution was later clarified - "Russian Scientific Center for Restorative Medicine and Balneology" of the Ministry of Health and Social Development of the Russian Federation. The status of the Institute that became the leading institution for rehabilitation and balneology in the country also changed.

Disease prevention and health care as well as medical rehabilitation have become the Centre's main activities. The building of the 30s no longer met the tasks and modern requirements so it was decided to demolish it. A multifunctional health-improvement - rehabilitation and scientific and educational complex was built on the same site and starting from 2010 the honorary doctor of the Russian Federation V.A. Linok was its director. The name of the institute has been changed again to the "Russian Scientific Center for Medical Rehabilitation and Balneology" operating under this name for 6 years, from 2011 to 2017. In 2014, V.A. Linok was replaced by Professor M.Yu Gerasimenko. 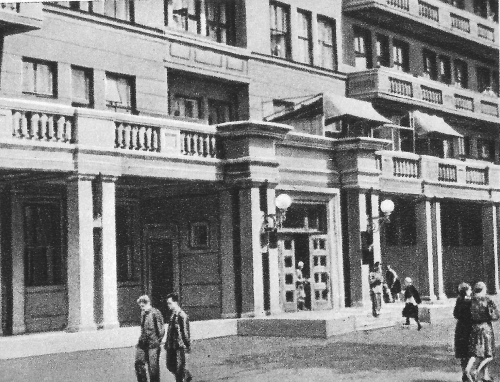 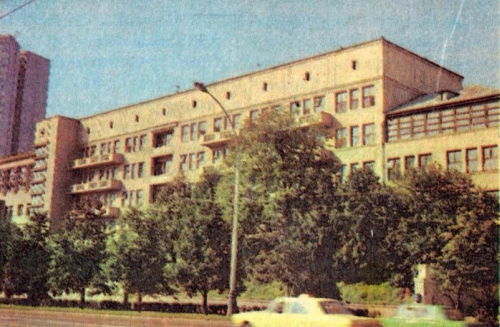 The institute had to change its name again in 2017. FSBI “National Medical Research Center of Rehabilitation and Balneology” of the Russian Ministry of Health has become a national center and has received a new head - acting director N.A. Startseva. 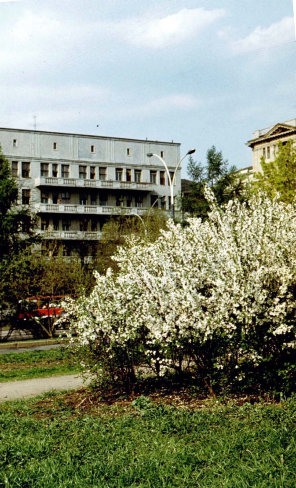 Clinical, biomedical and psychological problems of medical rehabilitation are now fully studied by the research teams of the Center. Balneology, physiotherapy and reflexology as well as traditional treatments are explored from the same position.

Patients of the FSBI "NMRC RB" of the Ministry of Health of Russia have the opportunity to undergo rehabilitation after injuries and diseases of the nervous system and musculoskeletal system, with the pathology of the organs of the cardiovascular, endocrine, digestive and genitourinary systems.

7 branches - sanatoriums located in different parts of the country operate under the leadership of the Institute. Headquarter is located on Noviy Arbat Street, 32.